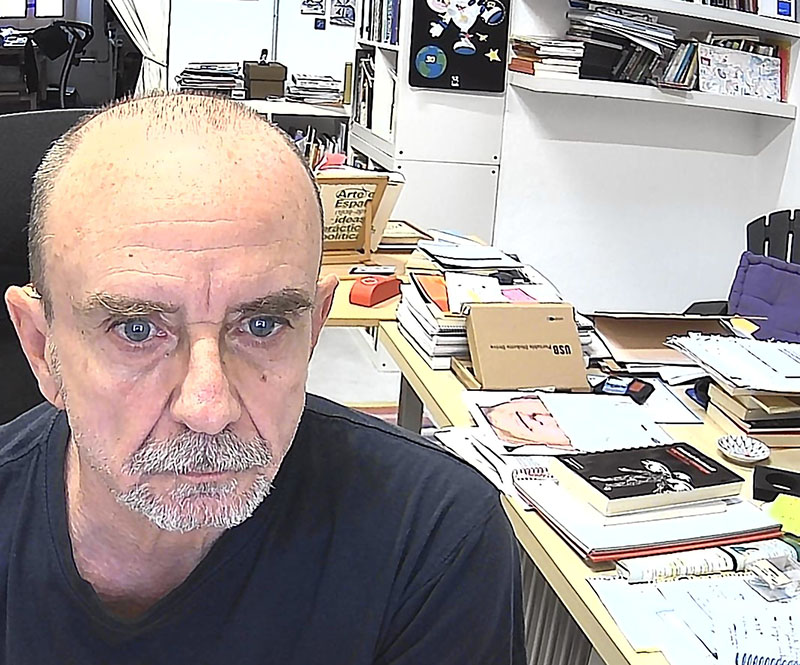 He is currently a tenured professor in the Faculty of Fine Arts at UMA, teaching Analysis of Artistic Projects and Performances and Interventions (Undergraduate level), Interdisciplinarity and Methodology in Art, Science and Society I (Master’s level) and also lectures on the Doctoral Programme in Humanities, Line 2, ART. He was Academic Coordinator of the Master’s Degree in Interdisciplinary Artistic Production at UMA between 2014 and 2017. At UEM he previously served as Professor (2003-2011), Strategic and Programme Director for Art and Design in the Faculties of Art and Architecture, and Arts and Communication (2007-2011), and Director of the Master’s Degree in Contemporary Art (2007-2011) and the Master’s Degree in the Manufacturing of Cultural Engineering (2008-2011). He was also a visiting professor for the Master’s in Art at the Complutense University of Madrid (UCM) (2003-2009). He was Vice-Dean of Infrastructure and Communication at the Faculty of Fine Arts in Malaga between 2015 and 2020. Currently is also professor in the Doctorate program of Humanities, line of Art, at Málaga University.

He has received scholarships from the Banco Santander’s Marcelino Botín Foundation (2000); the Picasso Foundation of Malaga (1997); the Casa de Velázquez in Madrid (2000) and the Andalusian regional government (1997). He received support from the VEGAP Foundation’s Assistance and Cultural Fund in 2021 and a grant from the Spanish Government to research a whole year (2022 to 2023) at Meiji University in Tokyo.

From the early nineties to the present day, his theoretical-practical activity in the visual arts field has been developed through a process in which thought, life and artistic production are intertwined in a non-disciplinary way. Non-disciplinarity is a way of speaking, a kind of neologism, of something that goes beyond conventional disciplines – neither «inter», «trans», nor «post». NON-DISCIPLINARITY: that which does not conform to any discipline nor submit to the disciplinary divides of the so-called real world.

He has carried out his work principally through different fields of research and active listening: art, science, thought and society, and through different mechanisms and techniques of artistic construction (installation, photography, video, films, drawing, painting, storytelling, essay, sculpture, interventions, action arts, among others). Through the use of a range of devices – ideas and materials – he evolves, in an intercalary, open and porous way, extensive and intensive lines that seek to understand the complexity that traverses and accommodates us, in a constant attempt to erase cognitive limits – as fictitious as they are contingent – or, at least, trying to render them more diffuse than usual, and how they are inherited from this or that power or area of influence. And so – performing this process with conscious awareness of what it means from the very beginning – he endeavours not to seek refuge under any disciplinary, thematic or methodological umbrella or social protection, thereby avoiding, as far as possible, adherence to this or that group of power or interest (whether it be intellectual, ideological, mercantile, or social, etc.)

He has held more than thirty solo exhibitions (at the Andalusian Centre for Contemporary Art and the Cavecanem Gallery in Seville, the Raquel Ponce Gallery, the Cruce, Off Limits and Ojo Atómico spaces in Madrid, the Contemporary Art Factory in Tokyo and the Nishijin Kitaza art space in Kyoto, the Artissima Art Fair in Turin, the Moreno Villa Art Gallery, the Municipal Museum, the Pedro Pizarro Gallery, the International University of Andalusia’s Exhibition Hall, the UMA’s Rectorate Hall and the Isabel Hurley Gallery in Malaga) and more than 60 collective exhibitions (various editions of ARCO, MAD 03, eu-art-network’s 6th International Workshop and 21st Kunstsymposium, the Salzburg Basics Festival, Overgaden, the Botín Foundation, the Andalusian Centre for Contemporary Art, Bilbao Fine Arts Museum, the Juana de Aizpuru Gallery, Artissima, Palazzo Albrizzi, Nishijin Kitaza, Off Limits, and the Budapest Gallery, etc.) in Spain, Japan, Austria, Germany, Hungary, Argentina, Denmark, Portugal, Italy, Sardinia, the Dominican Republic and France. His work can be found in private and public collections (the Andalusian Centre for Contemporary Art, the Unicaja Foundation, Artium Basque Museum-Centre of Contemporary Art, the El Monte Foundation, the Diputación de Málaga, the Picasso Foundation, the Rafael Botí Art Centre, and the Botín Foundation, etc.)

Among his research and curatorial activities, he has been Director at the Círculo de Bellas Artes in Madrid (2005) and at Arteleku, San Sebastián (2009), of the seminar “Art and science of Compleiy””. Between 2006 and 2010 he was a member of the research group Theory and practice of Contemporary Arte at the Faculty of Fine Arts of the Complutense University of Madrid. He has participated in several research projects at UCM and UEM and has been Director of the UEM research project «Action arts and election mechanisms” (2007-08), curator of the exhibitions Voting Interactions, Off Limits in Madrid (2008) and Post-voting Interactions, The Argentina Pavilion at The National University of Cordoba and the Cultural Centre of Spain in Buenos Aires (2010), curator of Four performers, or five (2016) and Seven performances, or nine (2019) at the Isabel Hurley Gallery in Malaga.

He has undertaken several international artistic creation and research visits, such as the 1998 Spanish Cooperation Programme at the Nishijin Artist-In-Residence in Kyoto and the 2000 International Meeting on Art and Rural Communities in the Dominican Republic organised by the Association for the Development of San José de Ocoa in collaboration with Columbia University. In 2006 he participated in the 6th International Workshop with Artists from the Europe-25 in Austria, attended by a total of 37 authors (visual artists and musicians) from the European Union, after having been selected as one of Spain’s artist representatives by the Spanish Government’s Ministry of Culture. He also took part in two editions – 2007 and 2008 – of Summer Workshops in Sardinia with the University of Alghero and the Polytechnic University of Milan. In 2021 he participated in the International Symposium and exhibition Who is «we»?, organised by eu-art-network in Austria.

He has been a member of the Advisory Board of CEDMA (2000-2002), the Editorial Board of the art journals Versions. Theory and visual culture (2007-2010) and Nolens Volens (2007-2012), both published by UEM. He has been a member of the Advisory Board of the Off-Limits space in Madrid (2006-2011) and of the Board of Directors of AVAM-Associated Visual Artists of Madrid (2005-2008). Between 2003 and 2008 he directed CEDMA’s collection of monographs on contemporary artists STRABISM (e. g. CEE Project. Muntadas, Molecular Informatics-Morphogenic Substance via Eye Tracking. Seiko Mikami) and, between 2007 and 2010, the aforementioned art magazine Versiones. He has directed UEM’s Semana del arte (2008-2011), as well as: the 1st Forum about Creativity and Transversal Innovation (2010) and the 2nd Latin American Cycle: Art and Activism in Argentina (2010). He has participated as a juror in Madrid Process 2005, in All-nighters 2008 within the Noche en blanco de Madrid and in the Newcomer Award 2010 of PHotoEspaña; he has also carried out cultural management tasks and provided artistic advice in the 2012 edition of PHotoEspaña.

His numerous publications include articles in academic journals such as «Cosmic art-craft» (Contrasts. Interdisciplinary Magazine of Philosophy), «Un-mobile Japan. An approach to contemporary art made in Japan. 1993-2001» (Art Issue, Department of Art History at UMA), «Mono-phrenic y poli-phrenic» (Micro-cracks. Booknotes of thinking and creation), «Irony in Richard Rorty (thrues, versions and lies in art)» (Versions. Theory and visual Cultural Magazine), «Medium-Political Art and Medium-Democracy » (Nolens Volens) and «De Rerum Natura, still» (Zehar, Arteleku). His books and individual exhibition catalogues include: Red outside and red outside (2007); Inter-topics. Live, Think, In the gaps (2008); Transversal relation among the artistic concepts of Play (Gadamer), Irony (Rorty) and Ritornello (Deleuze y Guattari) (2009); Impasse. Spectacles of frustration (2017); In-Disregard (2017), The Rhizome and the Sponge (Melusina, 2018); From this incomparable setting/frame… (2021). Since 2018, he has published opinion articles in the newspaper Público.es, CTXT, Infolibre and is a regular contributor to «The rumour of crowds», the philosophical blog of El Salto Diario.